Today is Leap Day – February 29th, the rarest of days.

Leap Day occurs once every four years. It’s a temporal recalibration of sorts that dates back to the first century B.C. Without the invention of Leap Day, today would be July 12, 2017.

In addition to being a terrible day on which to be born, Leap Day tradition in Ireland says women can propose to men on this day. Some speculate that salaried employees may work for free on Leap Day.

Leap Day is an strange and scarce occasion. It’s an opportunity to celebrate and enjoy an extra day in our year. It’s a holiday that comes around only every four years, and as such, it should be observed with extra reverence and ample care.

This year, I’m excited to commemorate Leap Day in the spirit of Leap Day William. 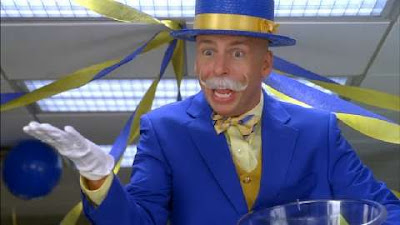 In episode 9 of the sixth season of the NBC show 30 Rock, the world was introduced to the wonderful lore and traditions of Leap Day William. I highly recommend watching the episode. It’s on Netflix and if I’m being honest, I’ll judge you pretty hard if you don’t.

By way of synopsis:

Leap Day William is an old, bald man with a handlebar moustache who wears a blue suit, top hat, and a yellow shirt. Tradition says that Leap Day William lives in the Marianna Trench. He emerges every four years to trade children’s tears for candy.

In his honor, every Leap Day people dress in yellow and blue. They eat rhubarb, give candy to crying children, and poke the eyes and pull the hair of those who don’t don the traditional Leap Day colors.

“Poke your eyes, pull your hair, you forgot what clothes to wear,” is the tradditional way to mock the Leap Day unobservant.

Like any holiday worth it’s salt, the lore and tradition of the day is secondary to the meaning and true spirit of it’s celebration.

Leap Day is about getting a magical extra day. It’s day to do the things you ordinarily wouldn’t do. It’s a day to take chances. Nothing is impossible on Leap Day and nothing that happens on Leap Day counts. Real life is for March.

The true meaning of Leap Day is about love and friendship and taking chances. Today is a magical day full of miracles. Just look for them and believe. You’ll see that they are all around. 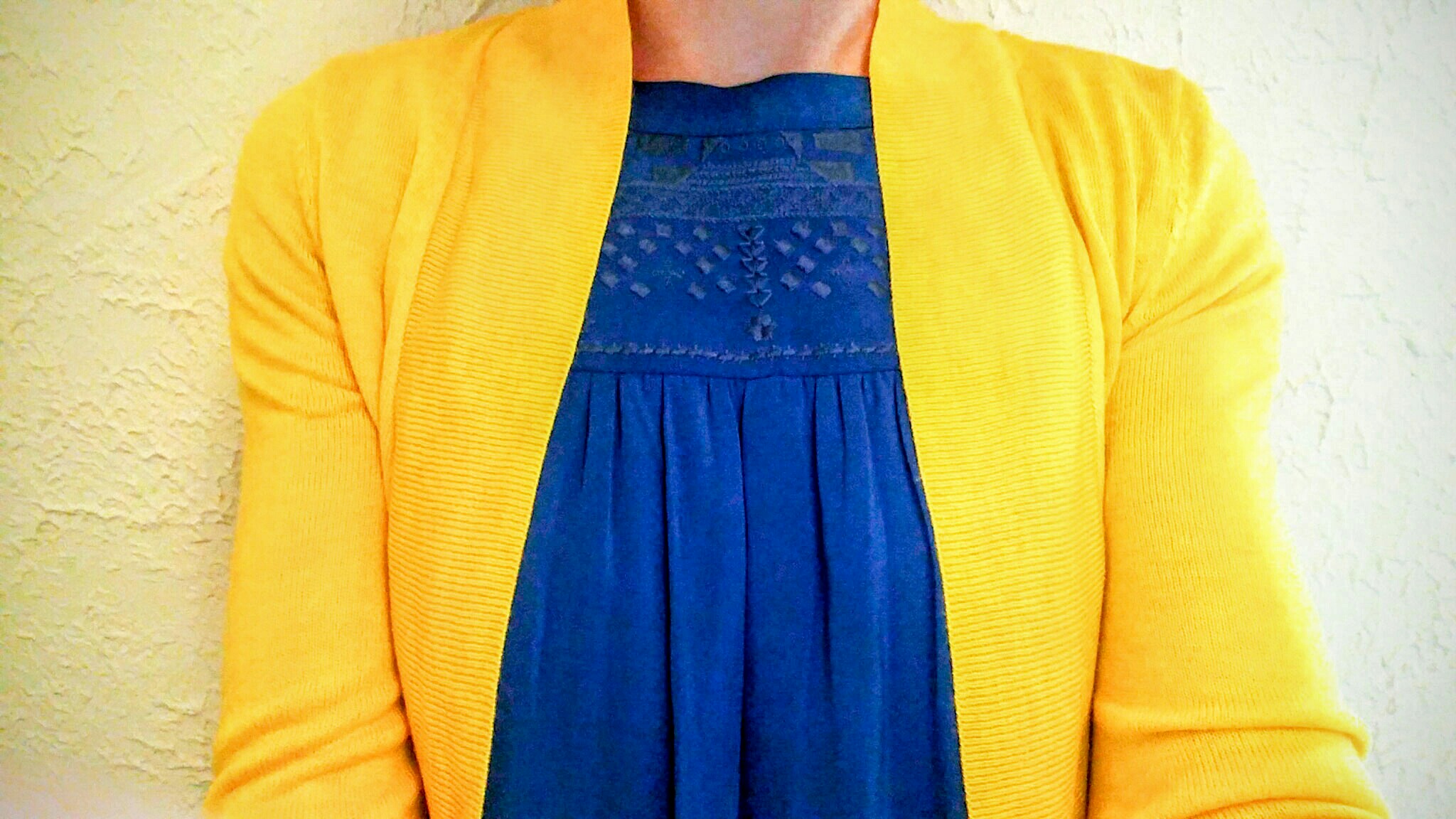 Leap Day is a holiday that should be celebrated.

The world is a cruel and ridiculous place – wars, refugees and terrorists, rapidly spreading viruses, political campaigns that have become a circus, and rampant and institutionalized hate. Most of us don’t have to look beyond our close circle of family and friends to name deep loss, sickness and hurt. Life is harsh and sad a lot of the time. If we don’t make a concerted effort to see and live beyond the raw and complex things of this world, we’ll be swallowed up by them – rendered fearful, angry and calloused.

Living fully, honestly and well requires that we acknowledge the bad, the hard and the messy – yes. But it also demands that we notice and celebrate the good. Life is a confusing bitch, but it is also beautiful and abundant. We must – if we are to get through life with any scrap of sanity – capitalize upon every opportunity to celebrate it’s happy, life-giving and wonderfully absurd things.  We need reasons to celebrate. We need reasons to get together with friends and family, to have a drink and wear silly clothes. We need Leap Day William.

I think that the spirit of Leap Day William is humor and ridiculousness.  It’s about love and friendship and celebrating good things.

So go out today and take a Leap Day chance. Spread the holiday cheer. Notice the good and acknowledge the absurd. And as Leap Day William always says, live every day as if it’s Leap Day and every Leap Day as if it’s your last. 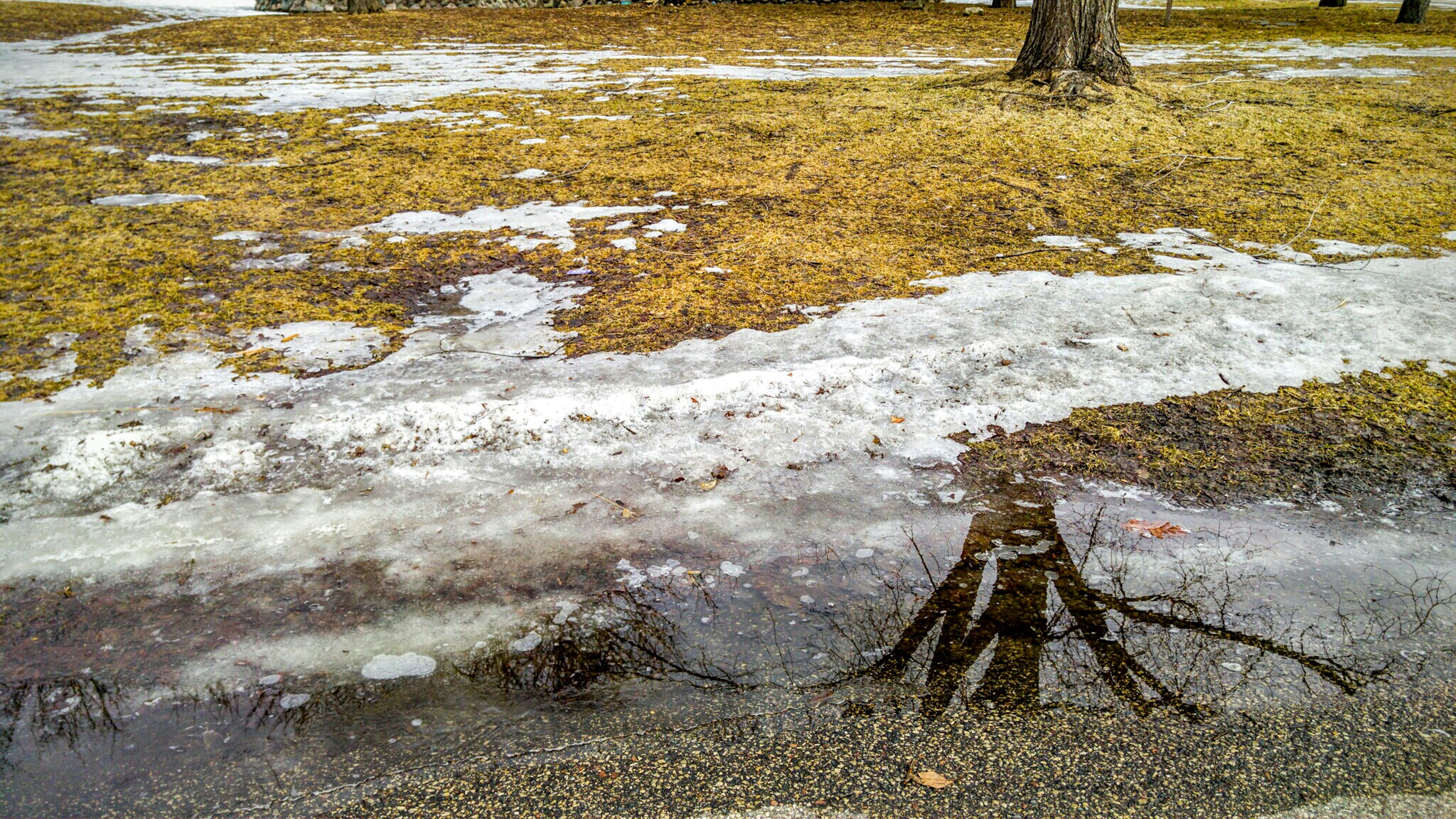 This strength of year’s El Niño may be a result of global warming and rising temperatures might eventually bring about the total destruction of our planet, but I’m not complaining about the unseasonably warm weather the Midwest has experienced over the past few weeks. The snow is melting. The ground is thawing. Life is returning.

Winter weather will visit us again, I know. But for now, let us rejoice.

In a place like Minnesota where snow and ice cover the ground for months on end, the advent of the melt is refreshing and welcome. It means new life and expanded opportunities. Although the diminishing snow signals a future that is temperate and green, the melting process is dirty and brown. The transition from winter to spring is messy.

Walk to the bus stop or take a jaunt around the neighborhood on the first mild day of spring and you’ll feel like a pirate discovering lost and long-discarded treasure.

Treasure is, of course, a stretch.

It’s more accurately trash. These are frozen and forgotten objects that have regained what little life they have left in the grimy thaw.

And if we’re being honest, when you go searching for the items that the snow has relinquished, you’re less a pirate and more like a scavenger – a buzzard, discovering odd, useless and gross things.

I’m a buzzard. And armed with curiosity, time and a camera, I’ve set out on a little photo project I’m calling: After the Snow Melts: things lost, things discovered. 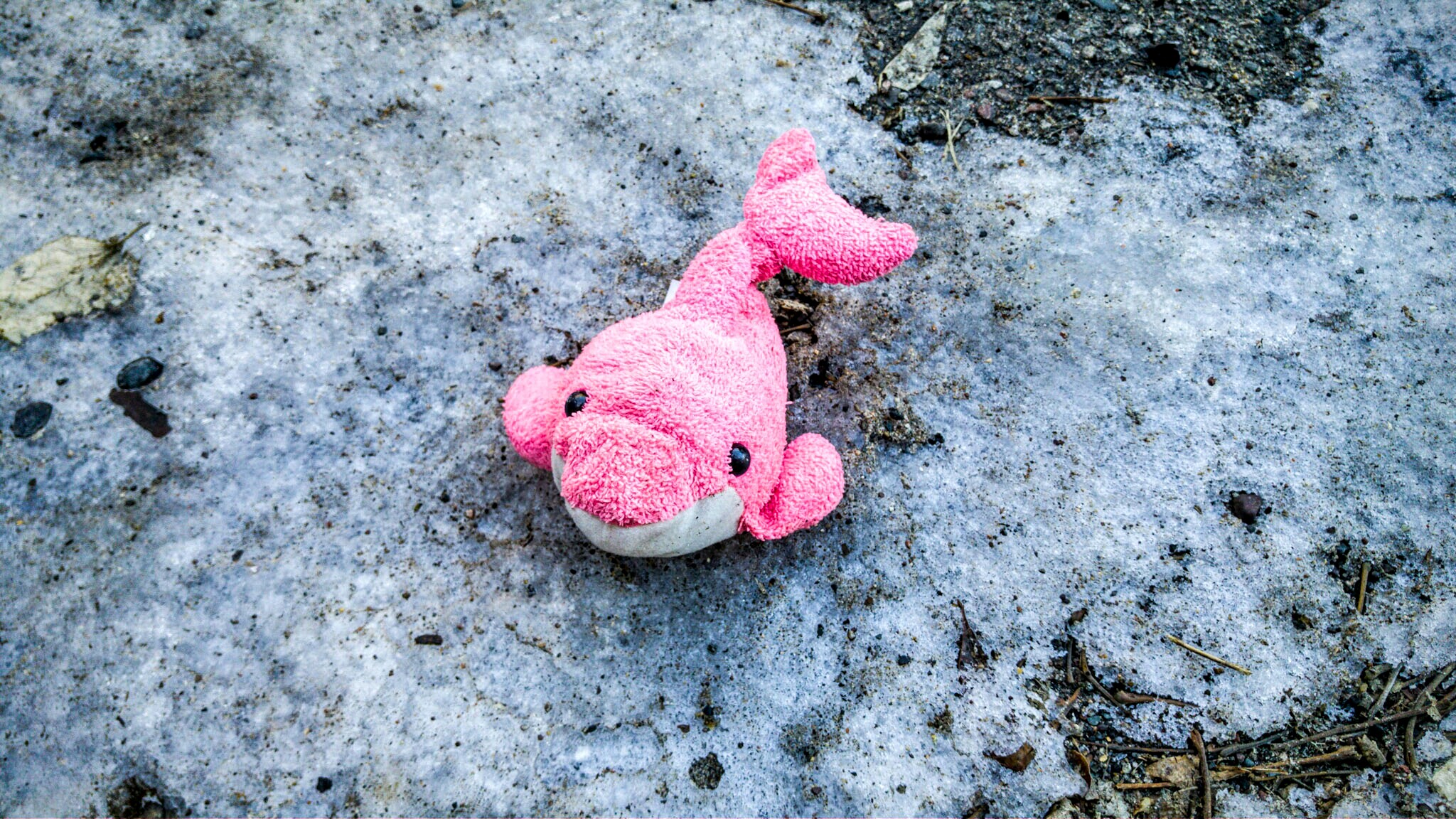 If these items could speak they would tell stories of loss and pain, of rejection and uselessness. Their thawing is not their redemption, it’s the beginning of the end. They will be collected and discarded once the grass begins to green. 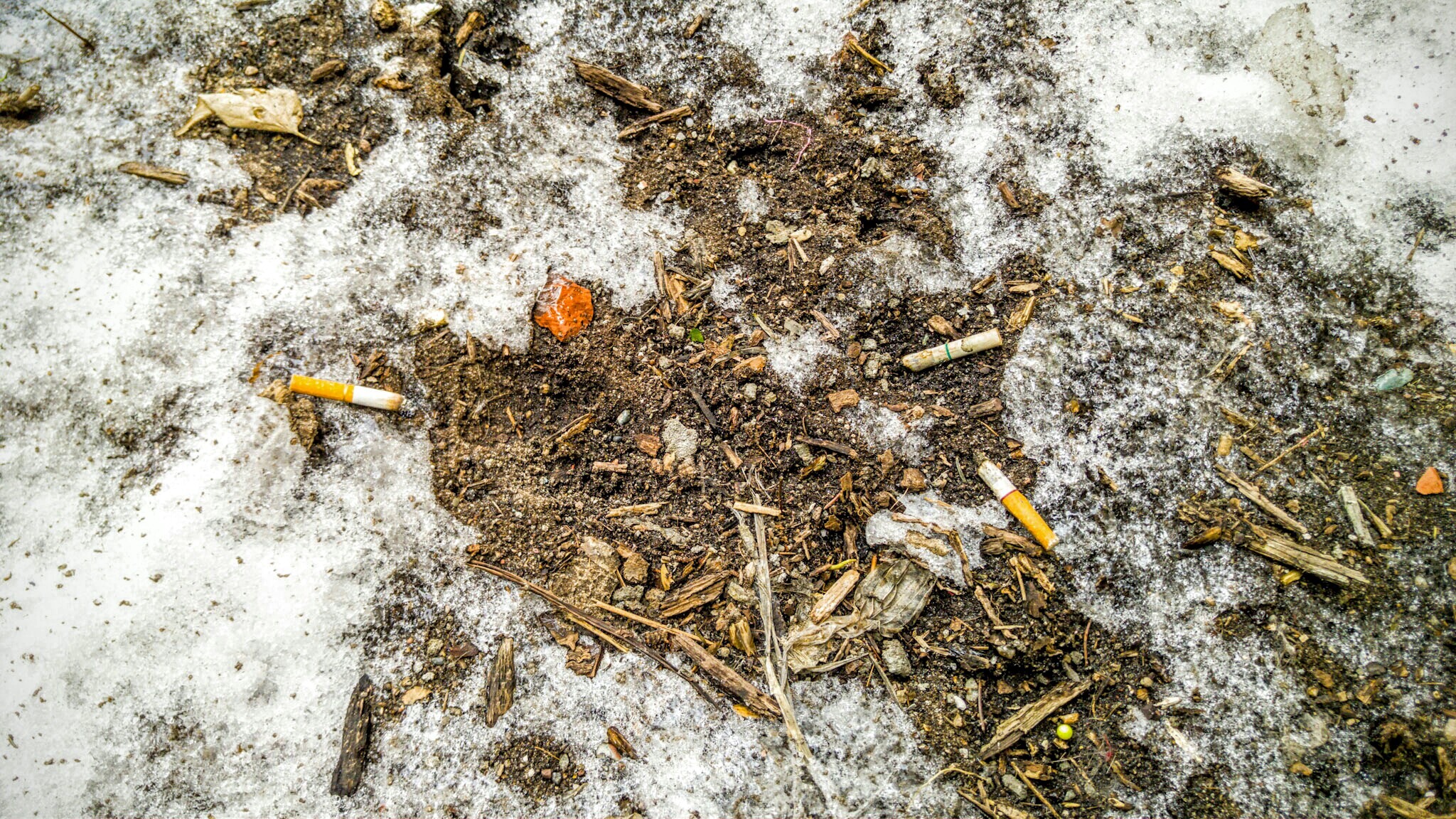 A majority of the items left behind after winter’s departure are explicable. They’re not necessarily acceptable, but they’re understandable. Trash – bottles, paper and cigarette butts – makes up the lion’s share of items found in melting snow.

Through this project I’ve come to believe there is something about winter that makes people forget how to throw things away. Shove it in a snowbank, throw it in the gutter. It’s too cold to be a decent citizen – they seem to reason. 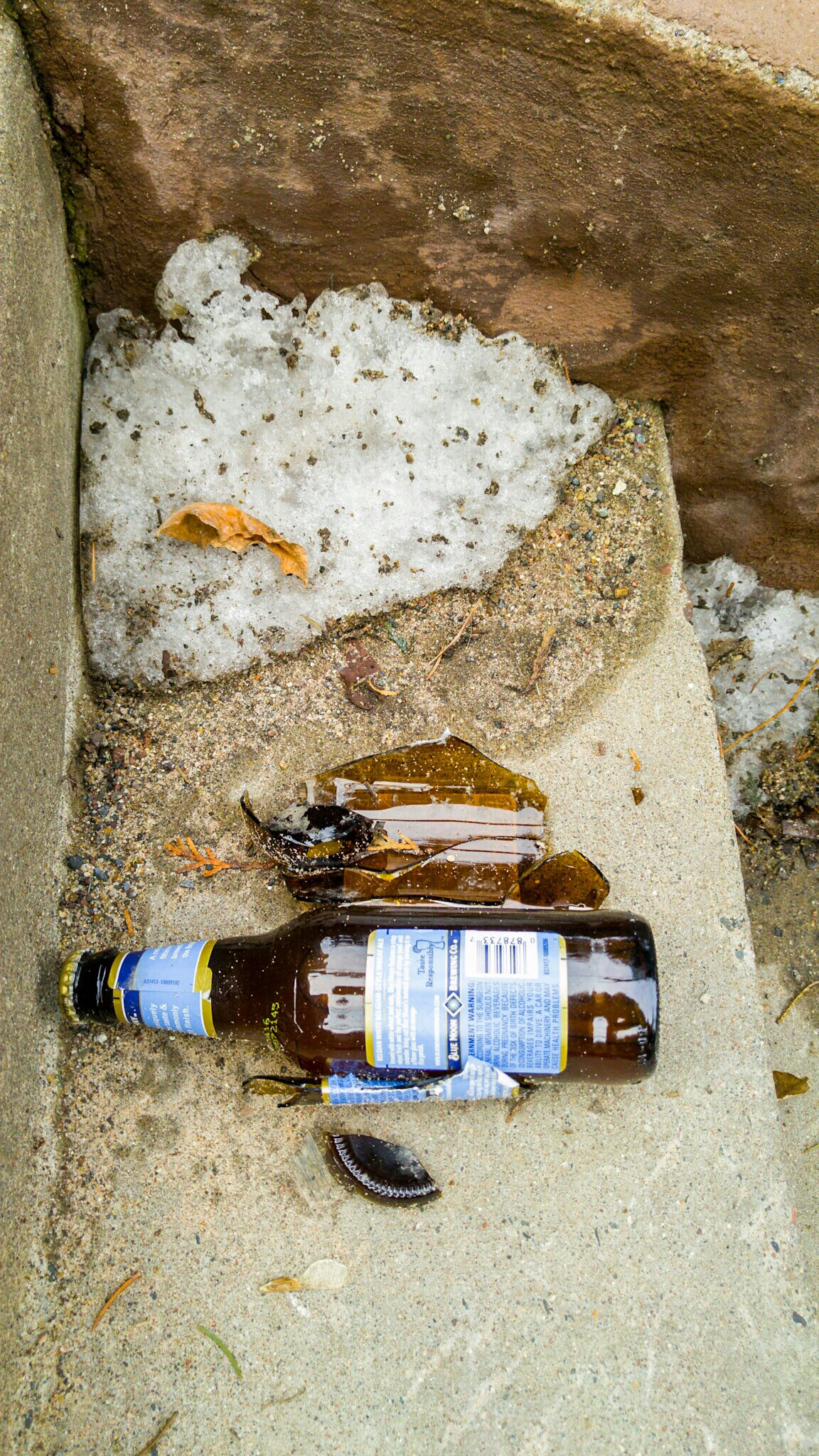 Beer Bottles. Left over – presumably – from one of the many occasions that one drinks outside during the winter. 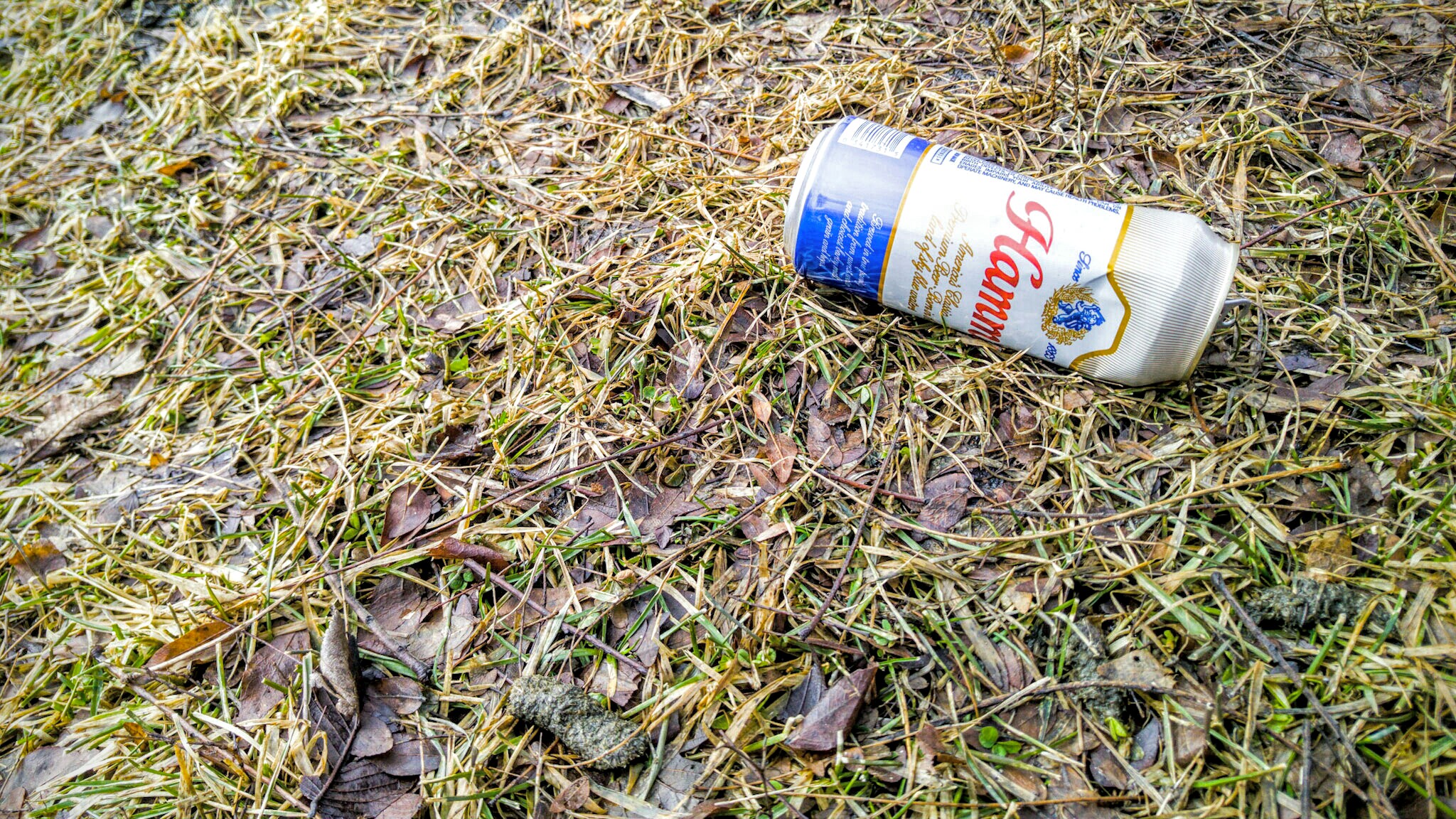 Of all of things one finds in a melted snow pile, beer cans and bottles are the most frustrating. They represent parties that you weren’t invited to and trash cans that weren’t utilized. They’re reminders of society’s widespread negligence and appetite for cheap beer.

These discarded items tell the story of a long winter. They tell the story of us – our laziness and addictions, our attempts at surviving the coldest months of the year and our search for meaning in a cruel and frozen world. 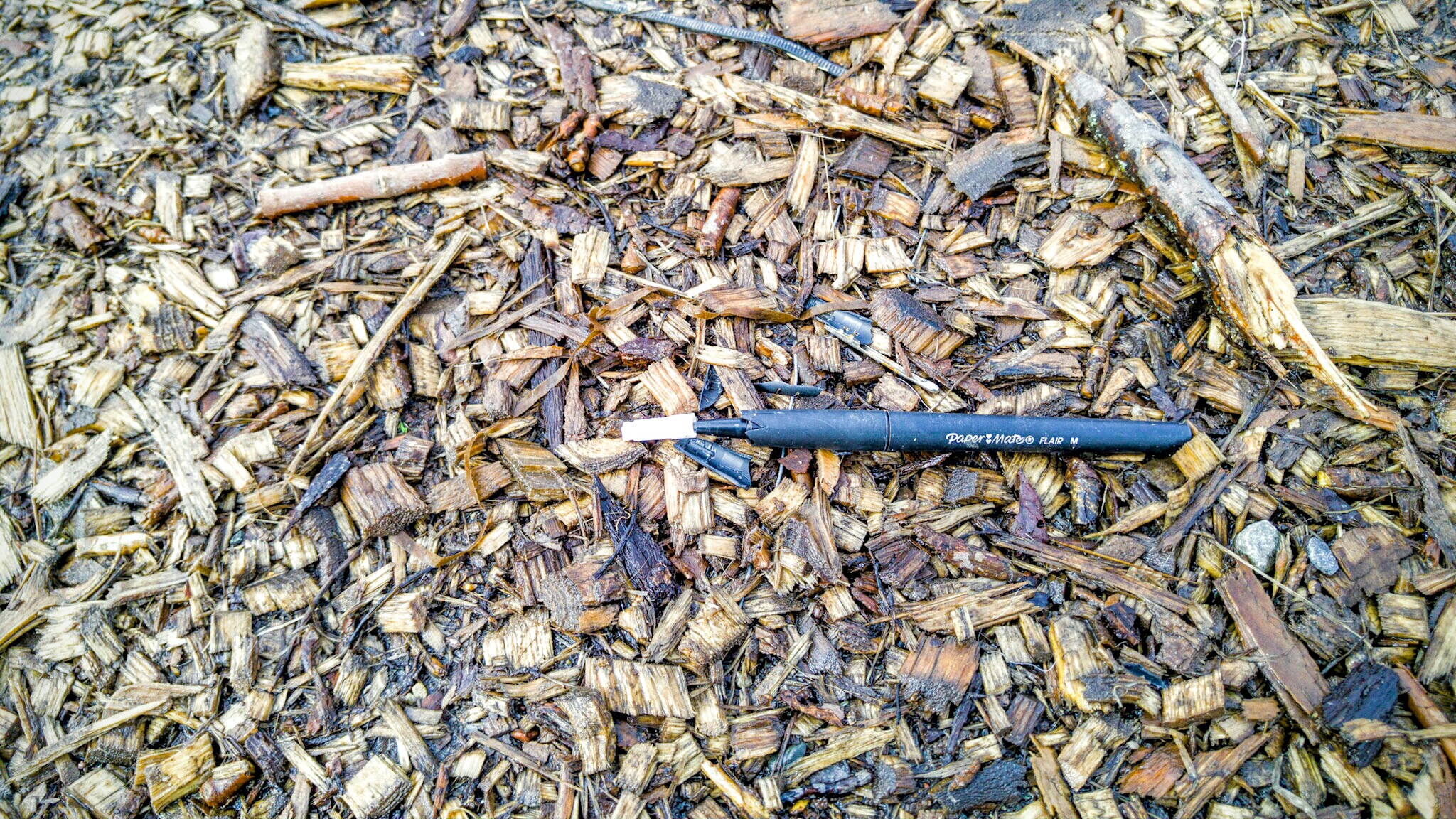 If it could write on it’s own, this pen would tell a cold, sad tale.

Although it is not something I prefer to document, dog poop is a prevalent by-product of melting snow. What was once frozen and hidden is now soft and waiting for you to step in it.

Although the purpose of this photo project is to document, not judge, I can only hope my efforts bring to light the disturbing trend that is the failure to pick up after defecating pooches. 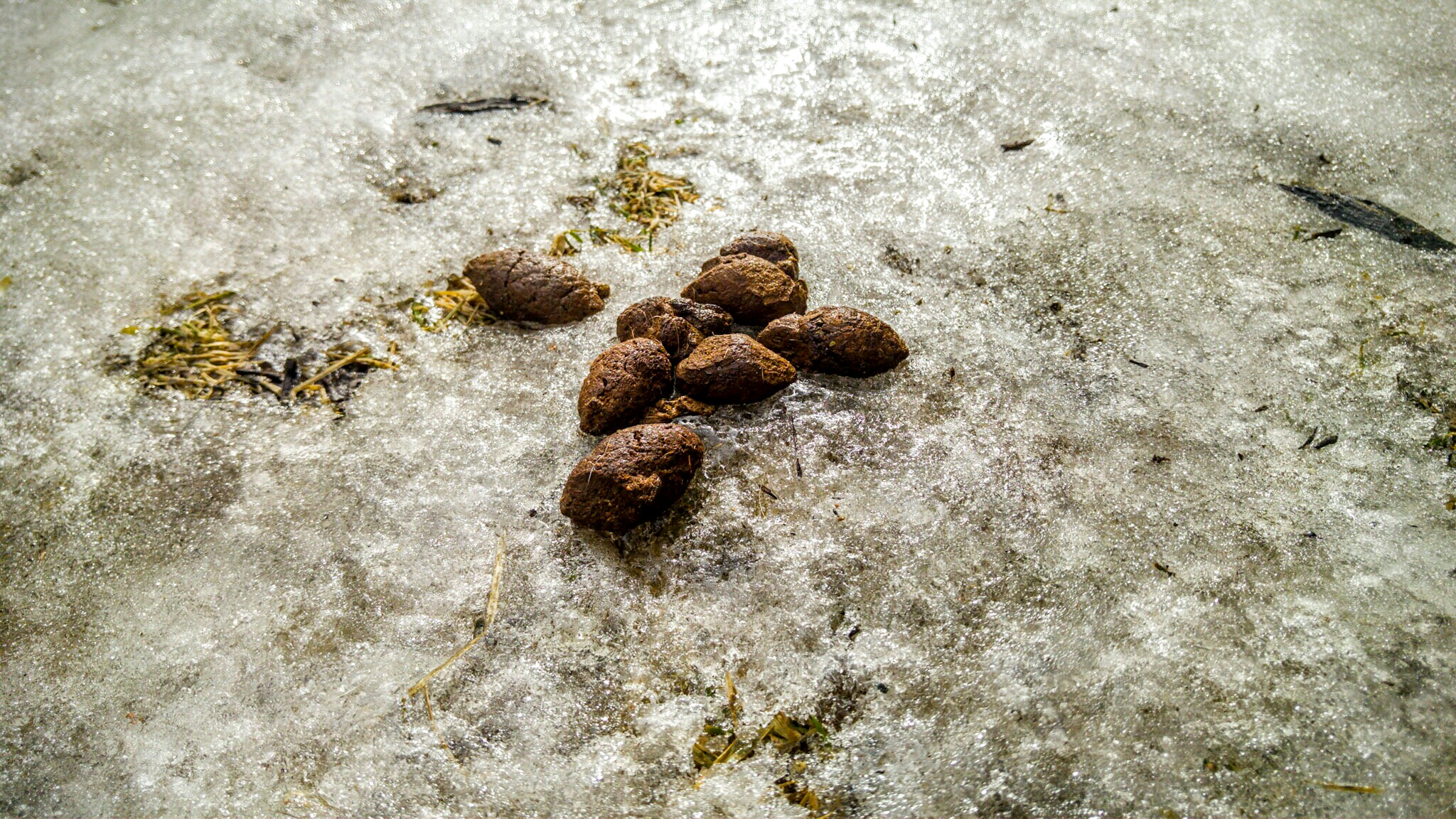 Some things lost and left in the snow are understandable – hats, gloves and scarves for example. These winter essentials are forever escaping our possession. They’re like socks in a dyer. But unlike widowed socks, I know where they end up – in the snow. 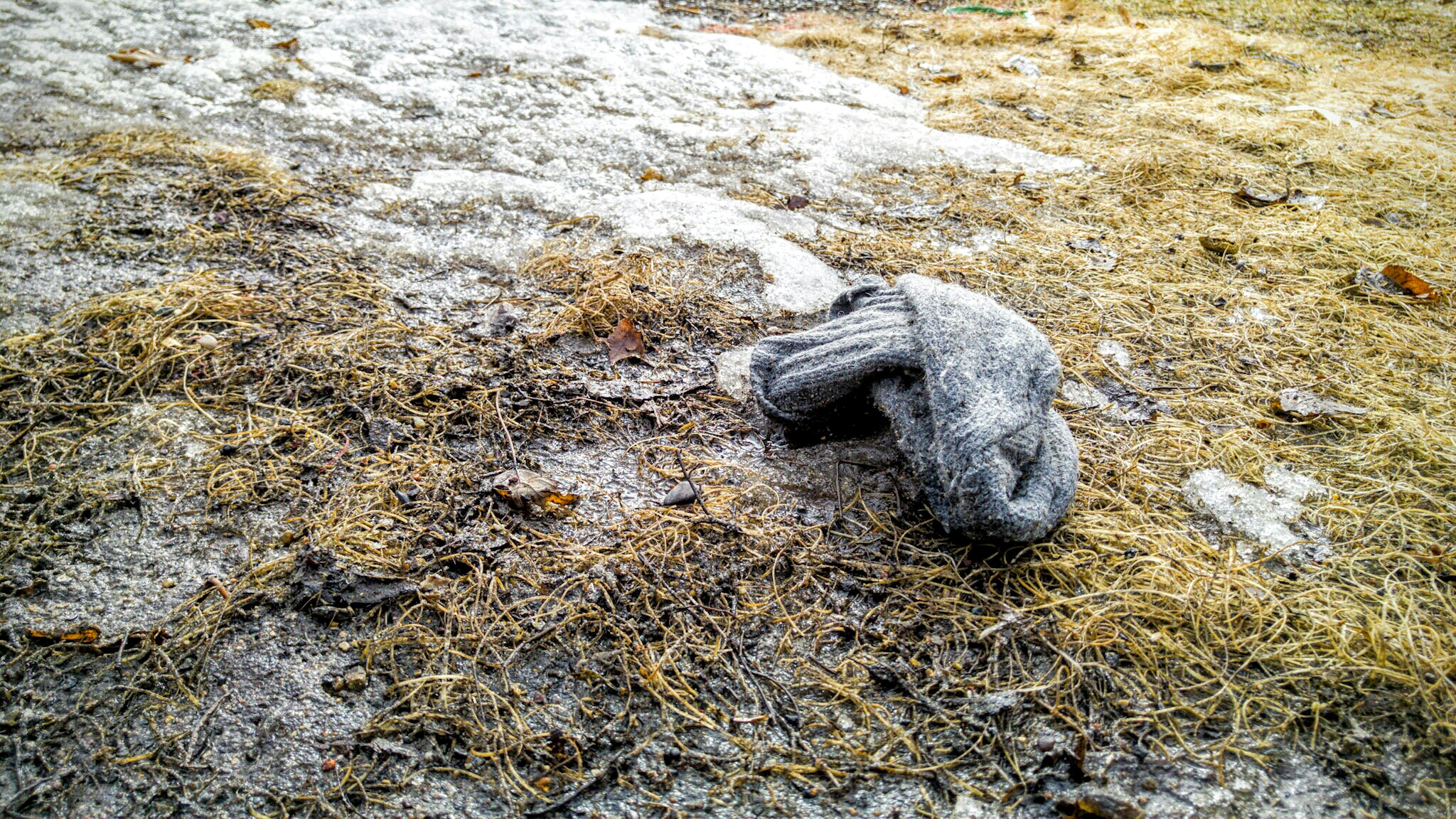 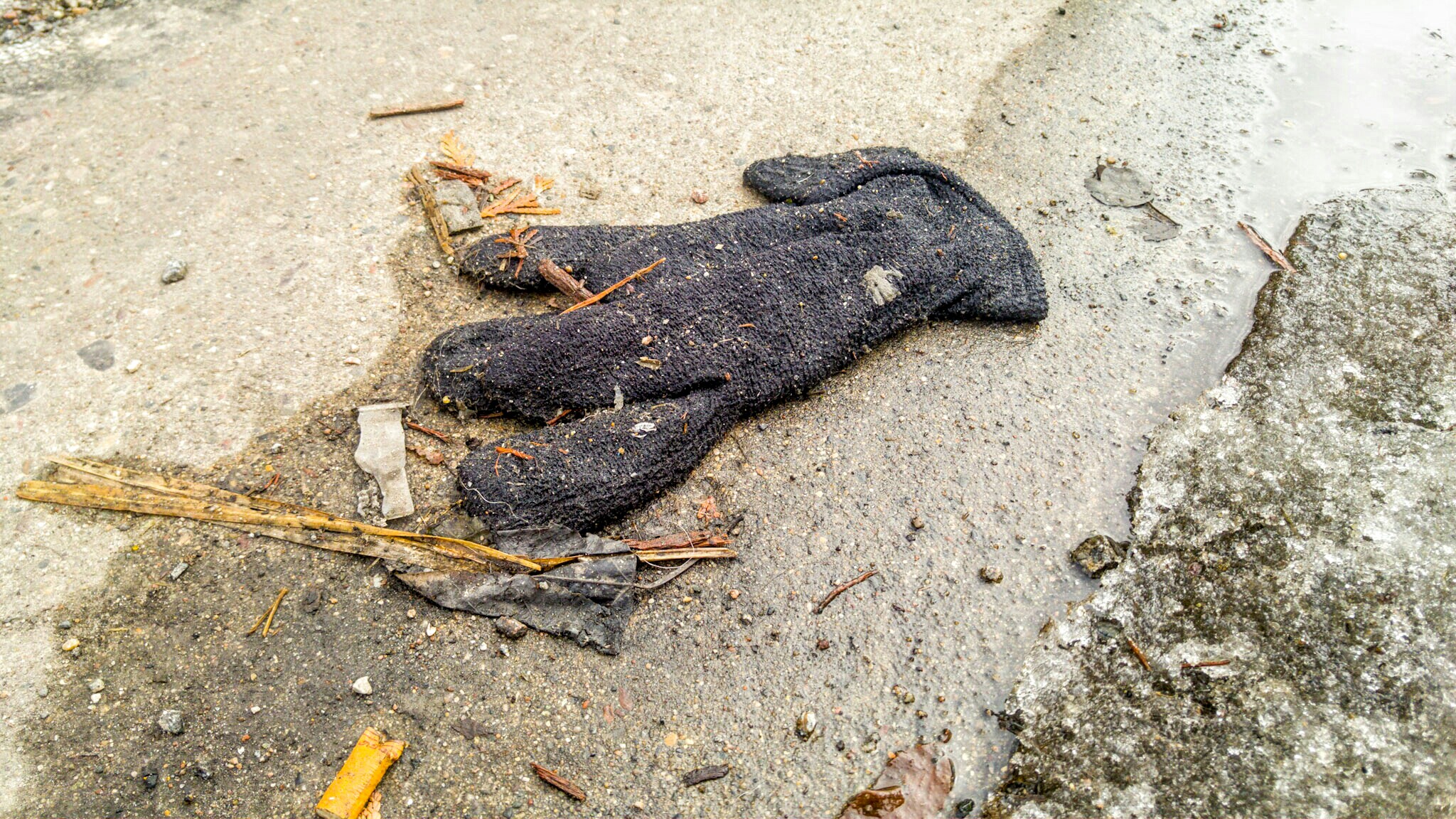 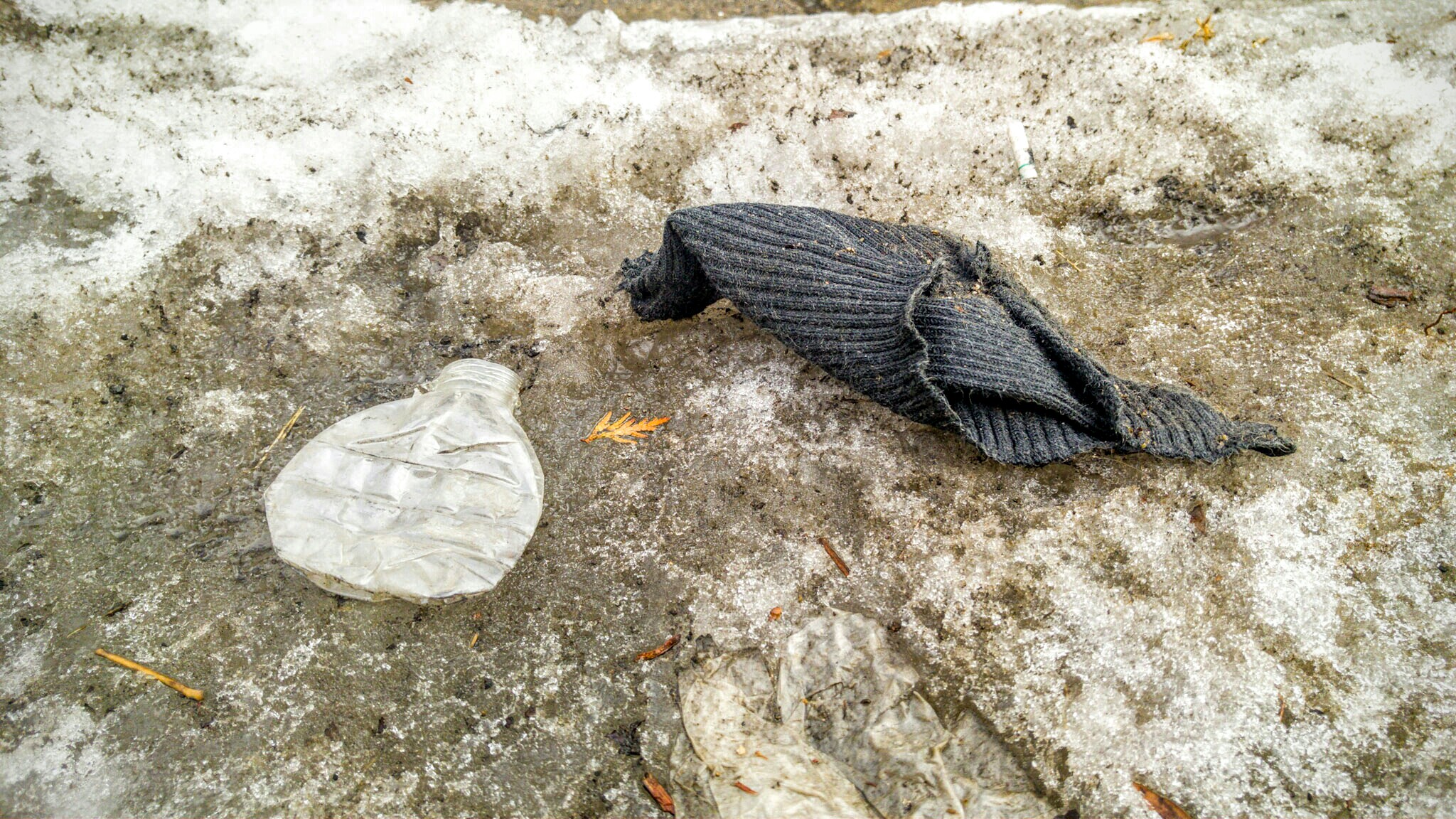 A hat in the gutter. It seems to have made a bottle friend. 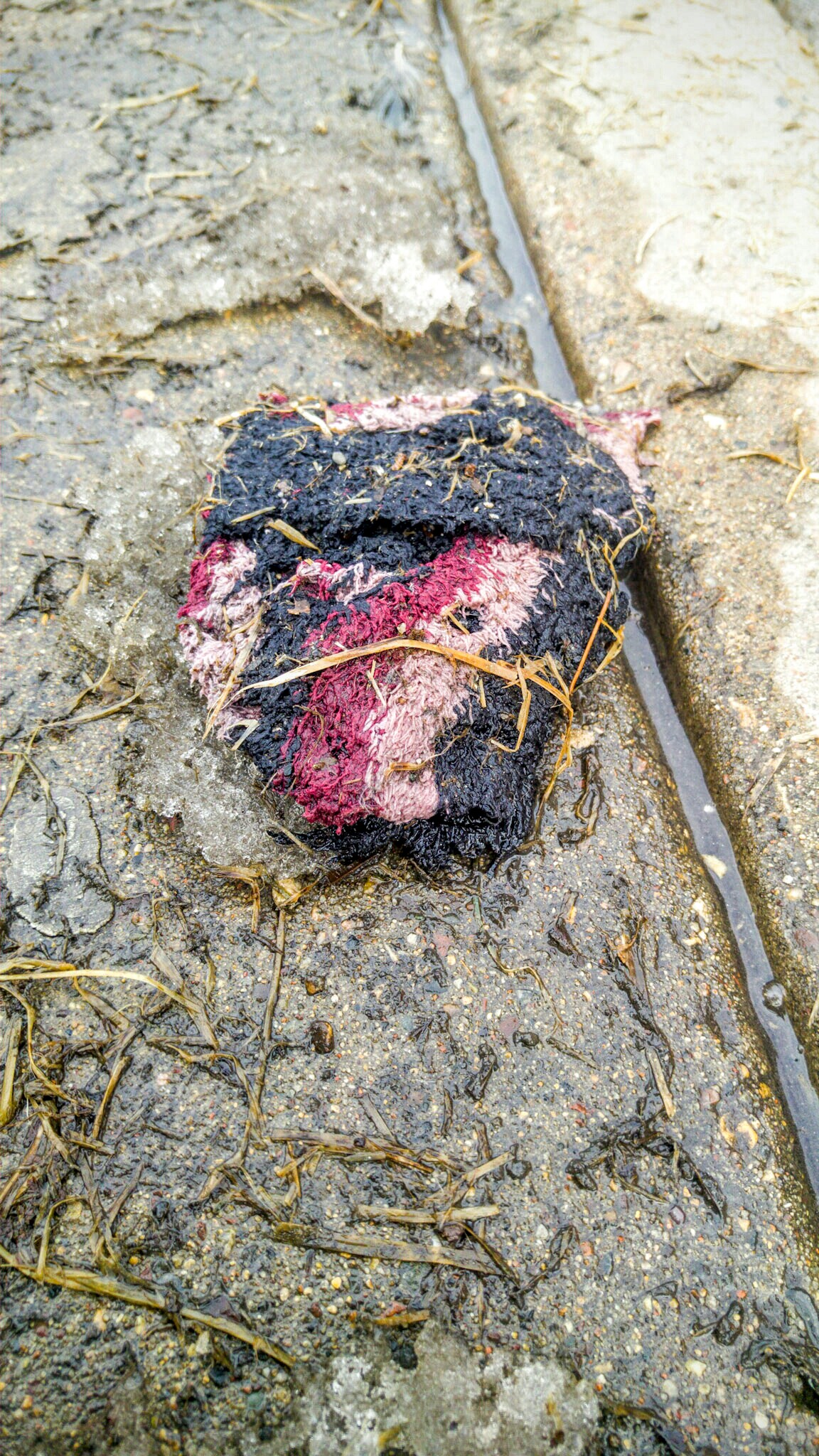 I don’t know what this is. It looks like it was once clothing. 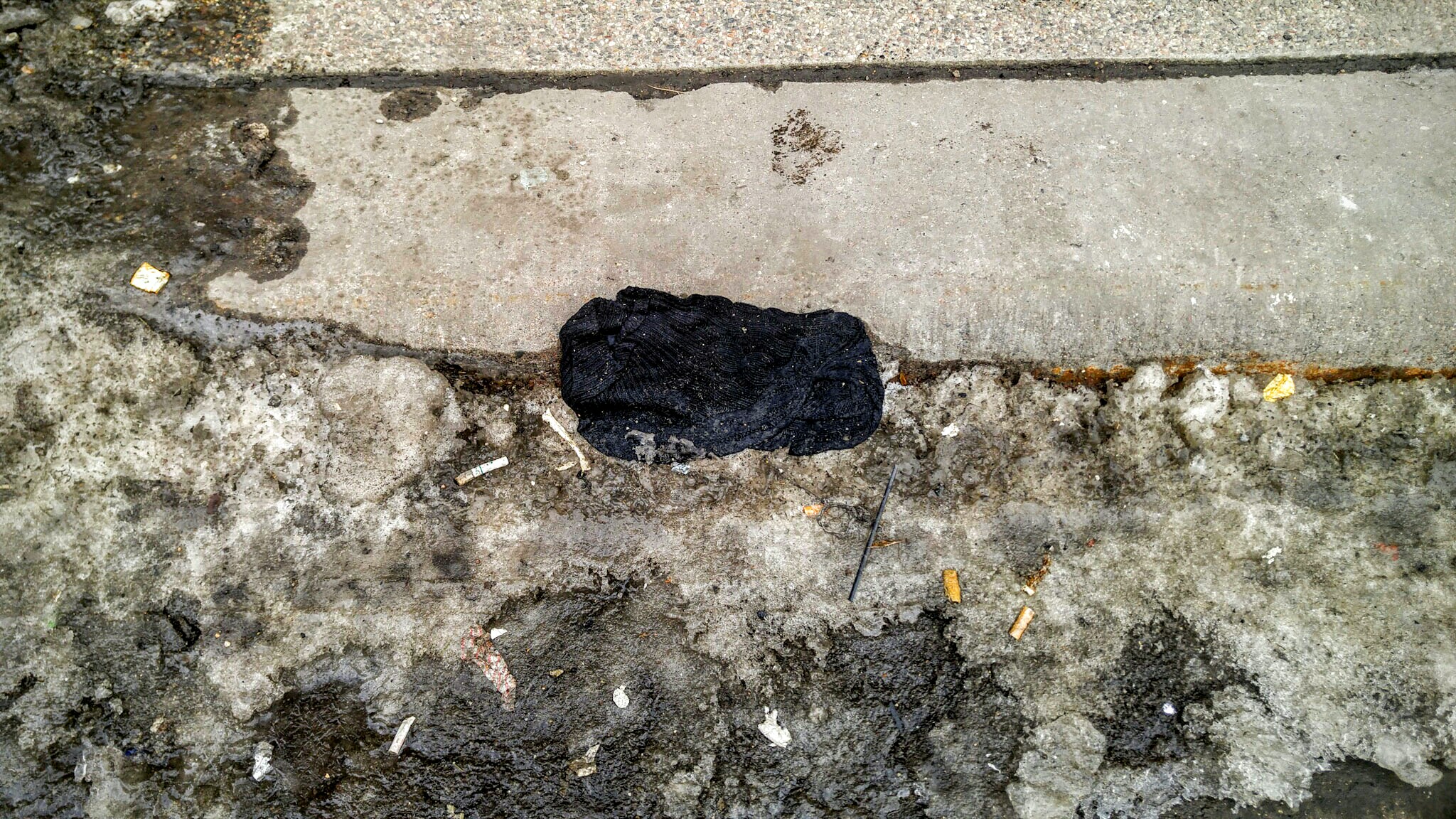 Another unidentified piece of clothing, lost and left to die by the curb.

Other lost clothing items are more confounding. The idea that a person could arrive home without these essential components of their outfit is disturbing. 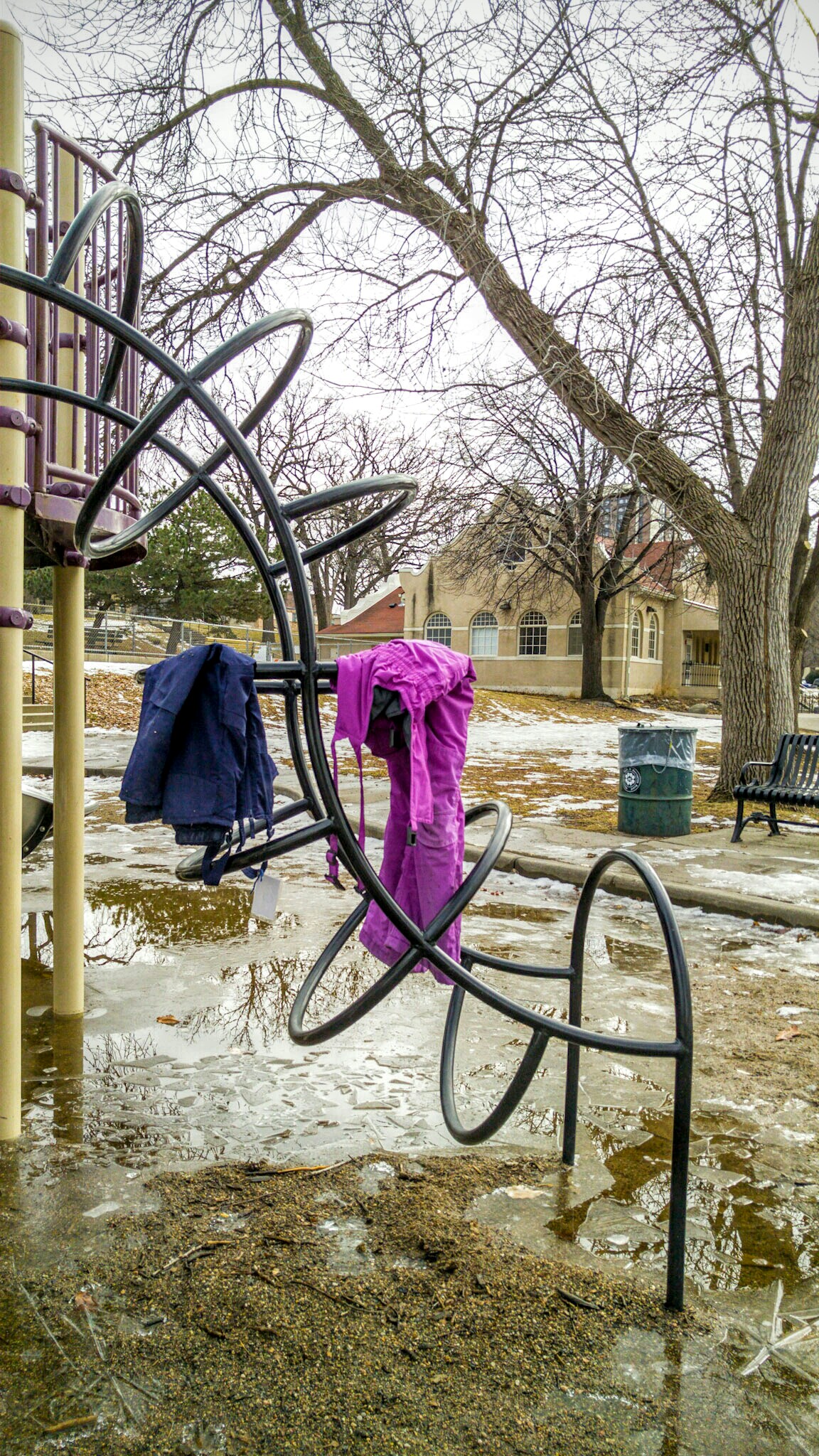 For me, the most interesting and rewarding items to photograph for this project are those in the category of weird, confusing and just plain sad. These items hold mystery and stories we will never know. They are secrets personified. Their tales of loss and hope mirror our own. 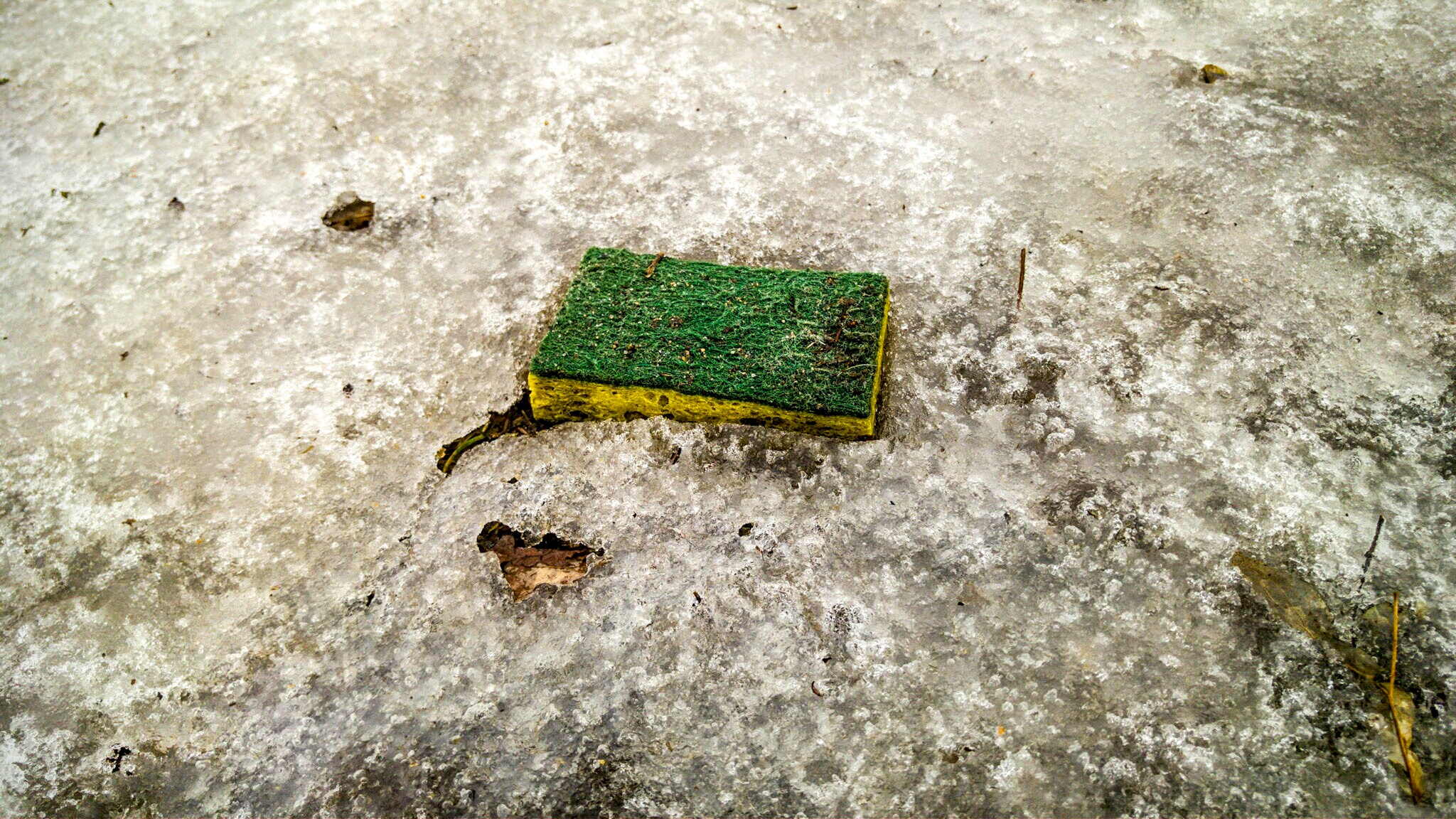 A sponge. There is a story here – about dishes and a misguided attempt at cleaning up. I’m sure of it. 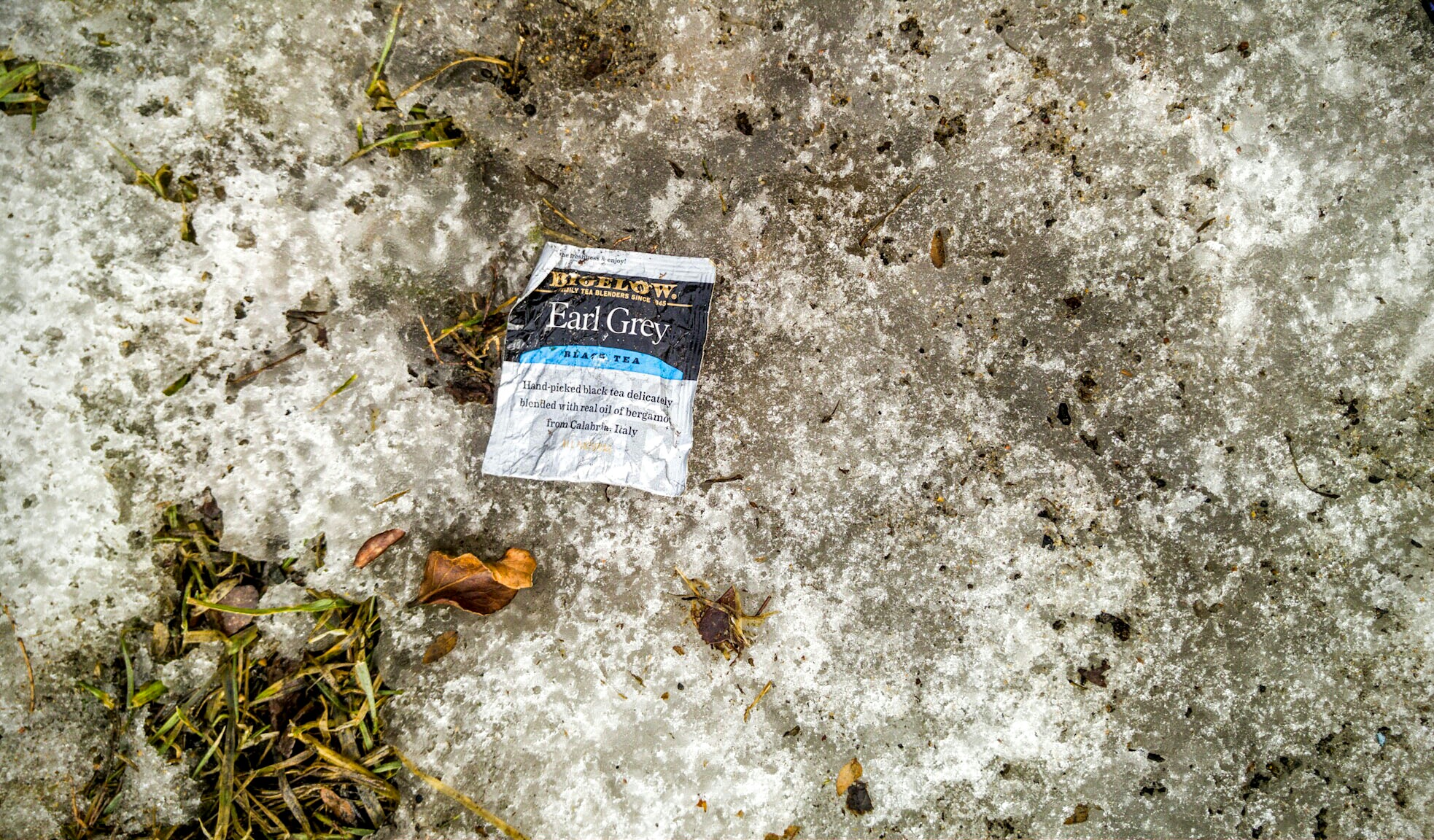 An unopened tea bag: a lost chance at warmth and peace. 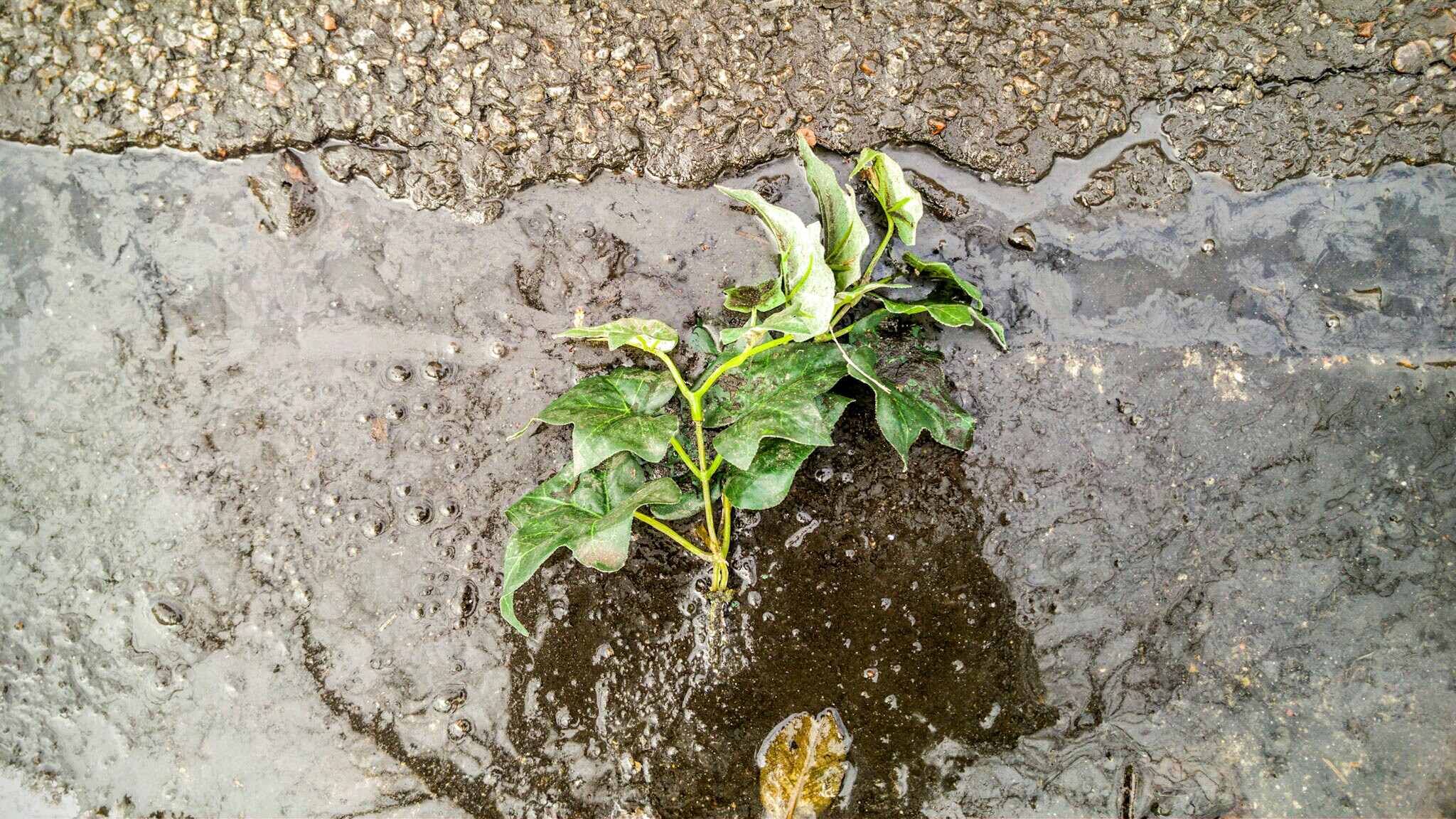 This fake plant is trying hard to stay positive amidst dire circumstances. 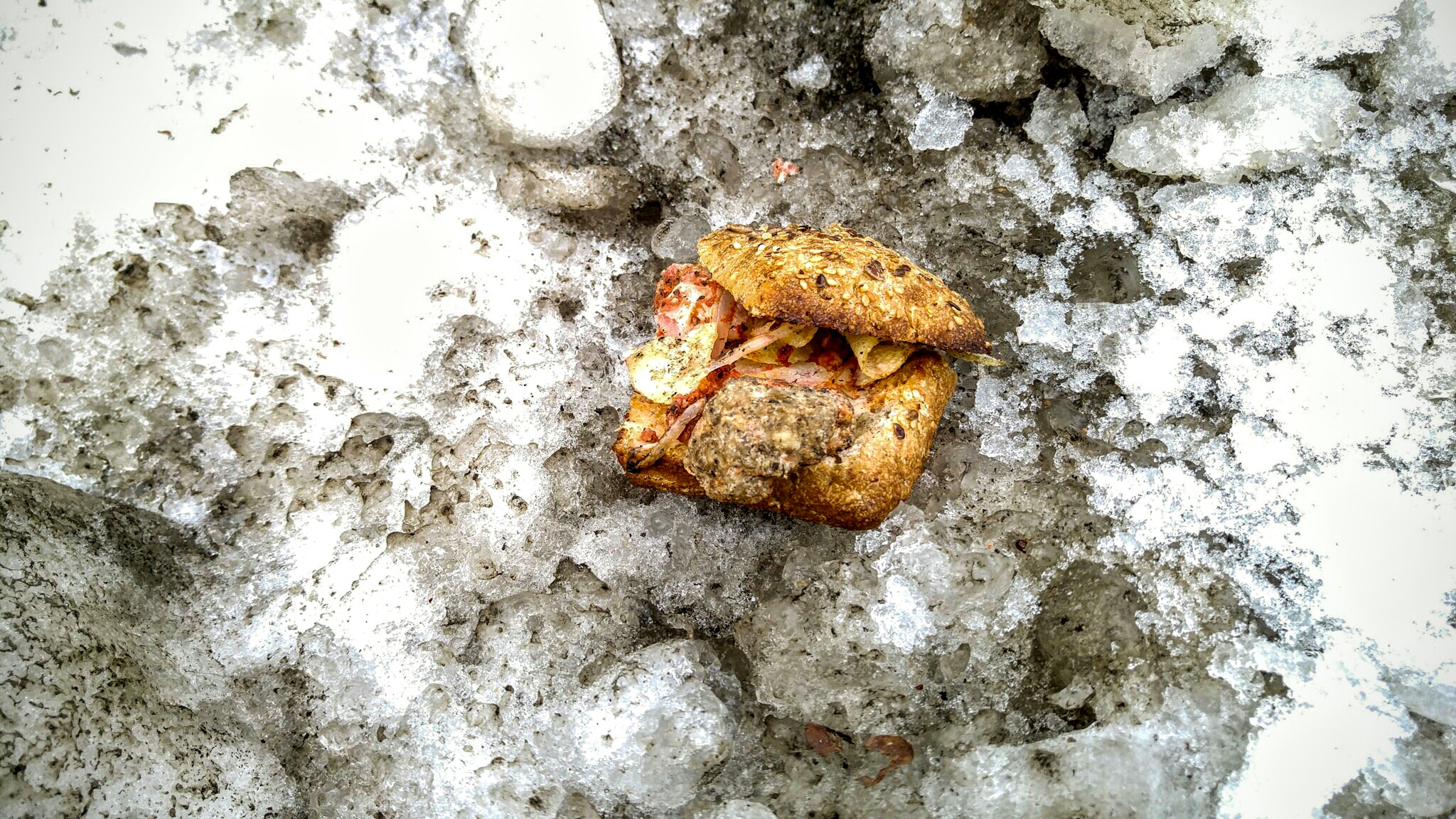 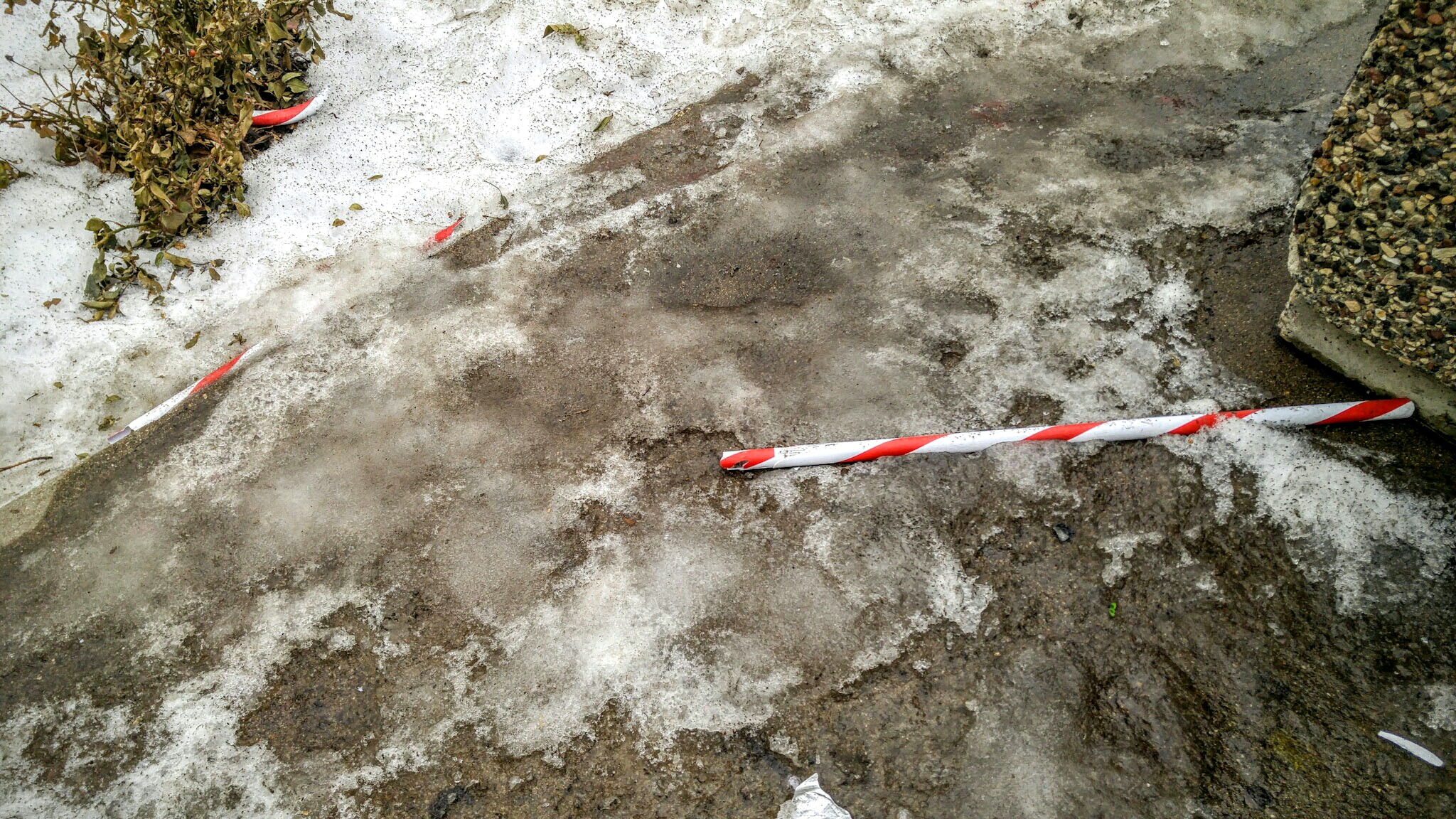 Broken and deserted Christmas decorations. This candy cane is full of symbolism.

Life, much like the vestiges of a receding winter, is messy and mysterious. It is full of loss and death and redemption and new hope. Capturing these items has been an exercise in presence and an acceptance of the more raw and real parts of life.

Scroll through the images below to see more of my work from this photo project.

This work of documenting winter’s remnants is ongoing. The snow is still melting. Capturing life as it is literally frozen and unfrozen in time has become a small hobby of mine, and I invite you to join in. Become a pirate – or buzzard – of winter’s remnants. Notice. Observe. Question. Capture.

Post your pictures of interesting frozen and melting items with the hashtag #afterthesnowmelts. Tell me about the most bizarre thing you’ve found in the snow, in the comments below.