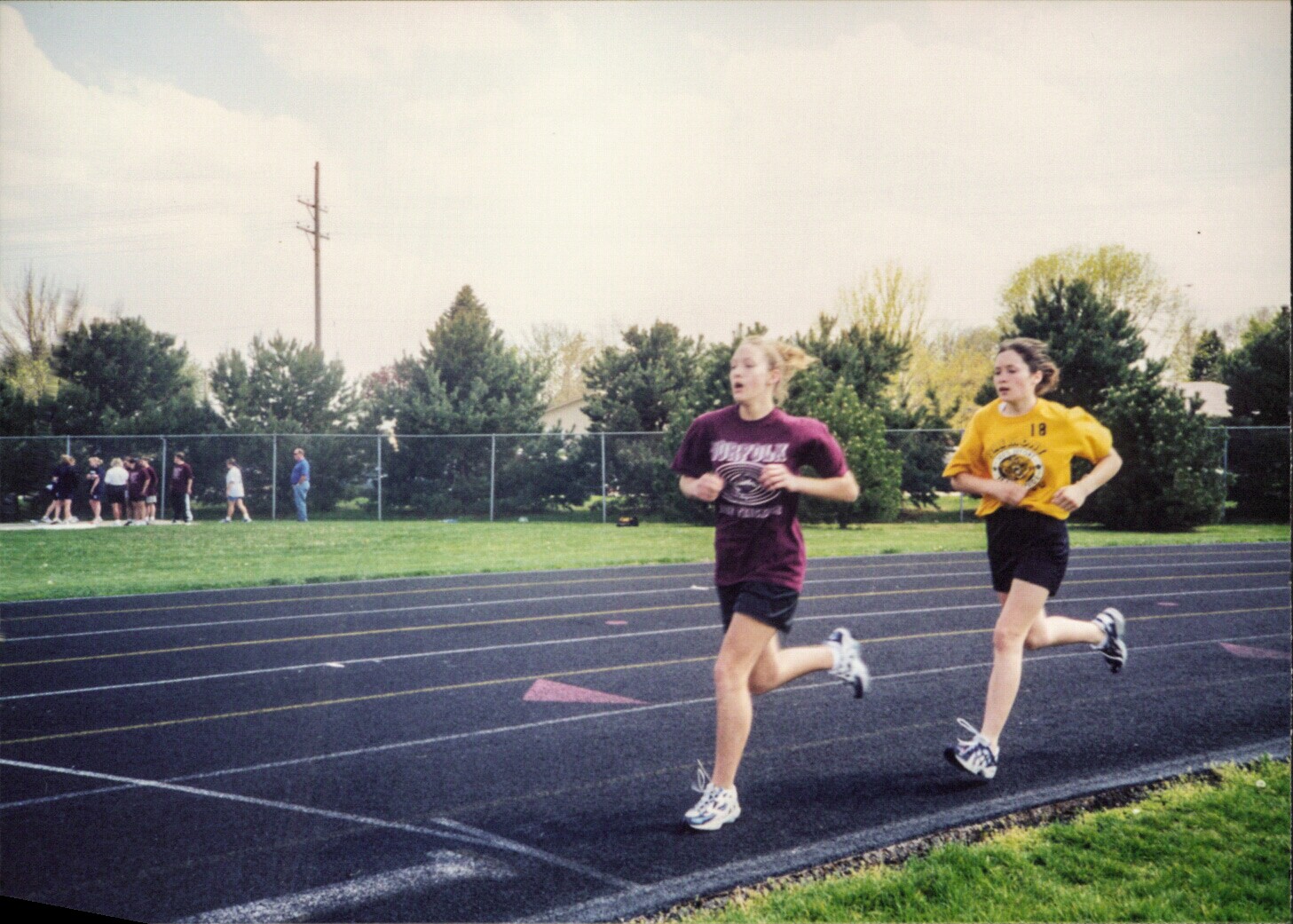 Well, that’s not completely accurate. I ran the “10-minute straw run” in gym glass. But if you were to ask my elementary school self, that didn’t really count. It wasn’t a truly accurate measure of my mile speed. And I cared about that.

You remember how the straw run worked, right? Orange cones marked out a circle in the field behind the playground. There were 10 minutes on the clock and you were given one straw for each lap of the circle you completed. It was the culmination of our physical education curriculum – the most dreaded and arduous undertaking of our 10-year-old lives.

And of course – as I did with all PE and related physical activities – I took the straw run way too seriously. I recall being convinced that people were cheating. I remember scoffing at my classmates who were walking. I also remember approaching my PE teacher after the bell had rung and class was over. I wanted to make sure – to hear it from her – that I had collected the most straws of any girl in my class.

[Remind me to tell you about the time I was the Third Grade Flexed Arm Hang Champion. It was glorious. I couldn’t write for two days afterward because my arm muscles seized up and gave out. I was so proud.]

Yeah, so basically I was that girl in Phy. Ed. that you hated. The one who you secretly hoped would “accidentally” get kicked in the face on scooter day.

The first time I ran a mile as a distance runner was in the summer of 1999. May of 1999 to be precise. I was fresh off a triple crown win at the All-City Track and Field Day. My 1st place blue ribbons for performances in the 400m, long jump and 100m shuttle relay were proudly pinned to the bulletin board in my room – likely next to my latest puff paint creation and the optical illusion JESUS heroglyph my grandmother had knitted on a plastic canvas. The later looked something like this. Grandma Krause made one for each of her grandchildren, and it had taken me several years and a lot of staring to finally see Jesus’ name.

I was 12 years old. I was growing out my bangs – but not all of them. Baby bangs were a big thing in Fremont, Nebraska at the time and despite my greasy, pimple-ridden forehead and inability to properly form them into the single swooping curl that the style demanded, growing out some but not all of my bangs felt like the first real autonomous style decision I had or could make. Those baby bangs made me feel cool and independent. They marked the beginning of my transition into adulthood and self-actualization – a process I’m still working through.

I was 12 years old and I looked like this: 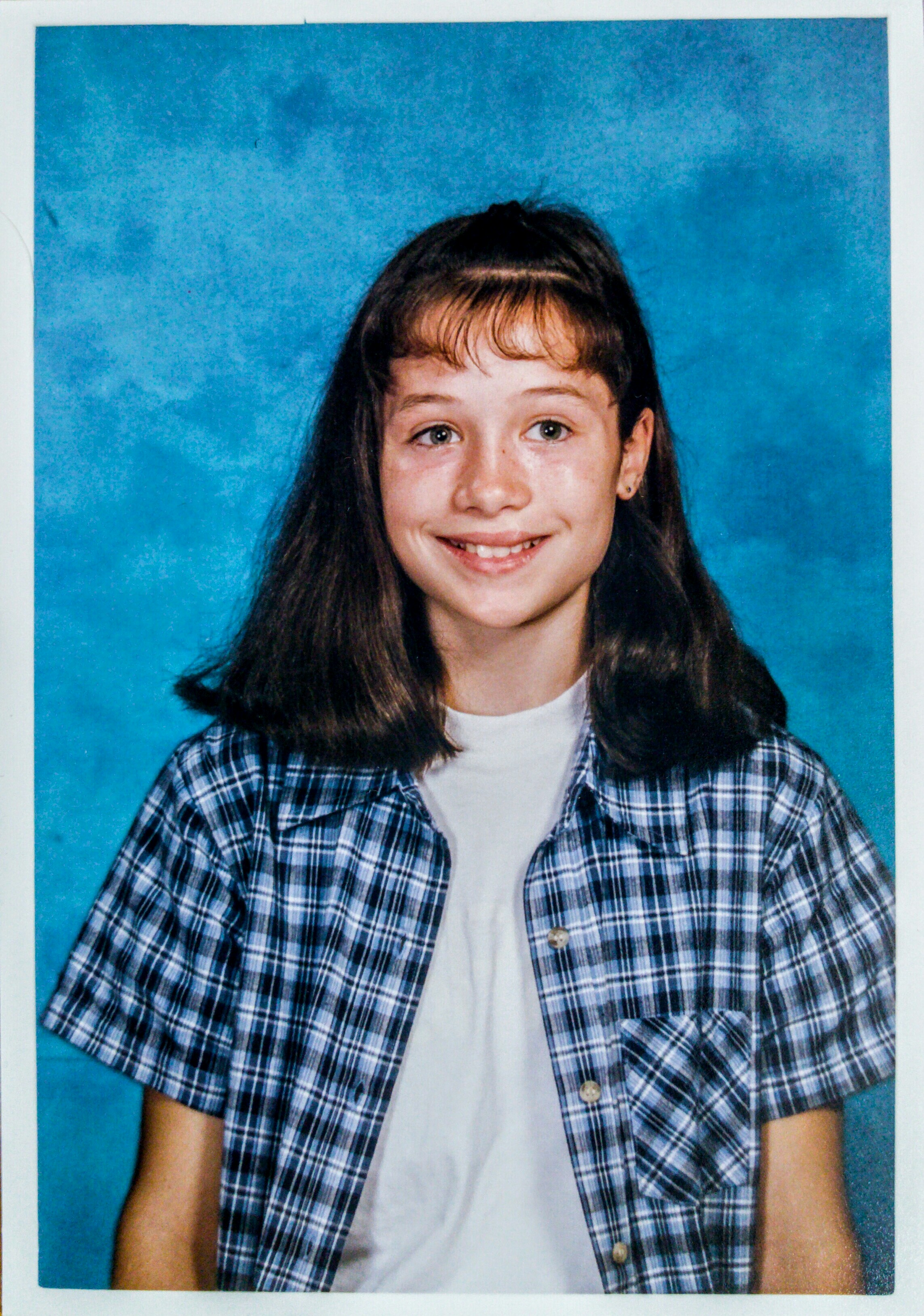 The day I ran a mile for the first time, my mother drove me to the high school. My hometown has only one public high school – Fremont High School – and it sits on Lincoln Avenue between 16th and 19th streets. In Fremont, the numbered streets pretty much end at 23. Beyond that it’s country roads laid out on a grid, corn fields and an intersection every mile.

It was 6:50 a.m. when we pulled into the north parking lot. I was sleepy and nervous. The high school cross country coach had invited me to train with the team several mornings a week during the summer. She had seen my victorious 400m effort at the All-City Track and Field Day and suggested that I give cross country a try. I peered out the passenger side window of my mother’s Chevy Astro van, watching as girls began to arrive. I looked for familiar faces and my stomach tightened. I wanted to be liked and welcomed; I wanted to do well. Like PE class, I cared – maybe too much.

All of the girls at practice that day – except for my friend Maggie – were older than me. I knew Maggie from church. We had gone to different elementary schools, but in the fall we’d both be starting 7th grade at Fremont Middle School. Maggie’s older brother ran cross country and she seemed to know what to expect; she seemed more confident than I.

Coach Hento was organized and direct, kind and clear.  After introductions and a stretching routine we divided into groups based on our abilities and the distance we would be running. Maggie and I were the last people assigned to a training group.

“You two will run with me,” Coach told Maggie and I. “We’re just going to go one mile today.”

I wore basketball shorts, a cotton t-shirt and athletic shoes. They weren’t running shoes – just basic trainers. And they were a size and a half too big because maybe I was still growing, my mother said. It turns out, I wasn’t. My feet never got bigger and I never grew any taller after the beginning of that summer. That summer was the onset of what I would be for the rest of my life – the start of me growing into myself.

Maggie, Coach Hento and I waited for the other groups of runners to leave before we headed out on our one-mile run. Coach told us that we would go slow and that the key to training for and running long distances is pacing. I let Maggie and Coach take the lead as we left the parking lot. We headed west on 19th Street toward Bell. I was quiet.

“Keep your breathing calm,” Coach instructed. “You should be able to talk while you run at training pace.”

A mile felt like a long way. The idea of a mile felt even longer. In Fremont you can get from one end of town to the other in under three miles. Up to this point, all of my conscious life had been spent in this place – this flat and quiet place. Perspective has taught me that Fremont is small and flat and quiet. But back then, to me it was real and the measure of all that was important and normative.

I don’t remember all the details of that morning, but if it was like most summer mornings in Fremont, it was cool and damp. If the wind was blowing in the right direction, the smell of freshly slaughtered pigs was drifting north from the Hormel plant south of the tracks. There probably wasn’t much traffic and there’s a good chance I saw a few people I knew during that one-mile run. It would have all been familiar, even if the running a mile part was not.

As we headed back toward the high school on 16th street, just as we were passing by the CMA Church, Coach turned back to me.

“Don’t let your feet hit the ground so loudly. Your foot strike should be soft,” she instructed. “And drop your arms. Don’t carry them so high.”

I felt embarrassed and a bit discouraged at her instructions. For the remainder of the run I focused all my energy on quiet feet and low arms. I had so much to learn.

Unlike all of my running endeavors up to that point, this training run did not end in a sprint to the finish. There were no winners and losers that day – just an easy, abrupt stop and encouragement and affirmation all around. I liked that.

Coach Hento and I were the last people at practice that day. We sat on a concrete bench outside of the East Gym of the high school and waited for my mom. Coach asked me what I thought of my first day of cross country practice. Did I enjoy it?

I was being honest. I didn’t see myself as a long distance runner. There was a real sense of accomplishment in having run one mile, but thought of doing many more in succession was daunting.

And I did – obviously. Quitting was a sin in my house, after all. I came back the next morning and the one after that, and again the next week. My arms started swinging lower without me thinking about them. I got real running shoes and my feet stopped striking the pavement so forcefully.  I heeded Coach Hento’s advice and by the end of the summer my longest run was a 5-miler. Five miles is basically a marathon when it means that you reach every edge and cross all the major streets of your hometown.

By the end of the summer I was addicted to that unique sense of accomplishment running imparts – that very personal, quiet strength and self-gratification that bubbles up when you’ve done something powerful and beautiful and hard.

17 years later, I’ve learned that that sense of accomplishment never goes away if you’re kind enough to yourself to acknowledge it.

That summer was the beginning and end of a lot of things for me. My feet stopped getting bigger and I started growing out some but not all of my bangs. The following summer I would grow out the rest of them and start buying smaller shoes.

That summer I started gaining perspective on myself and my home. I started growing into and out of my life. I started figuring out the parts of me that are essential, and the things I’m better for leaving behind.

That summer I found my passion and my tribe.

The first time I ran a mile didn’t change my life. But now, with a little more time, mileage and perspective – I can say that it probably did.